The Tshechu is a festival in honor of Padmasambhava, “one who was born from the lotus flower”, popularly known as “Guru Rinpoche”, the Precious Teacher. This Indian saint contributed enormously to the diffusion of Tantric Buddhism in the Himalayan regions of Tibet, Nepal, Bhutan, etc. around 800 A.D. he is the founder of Nyingmapa, the “old school” of Mahayana Buddhism, which still has numerous episodes on the model of the Buddha Shakyamuni’s life. The festival of sacred dances is held annually. It was Drukpa Kuenley’s descendant, Tenzin Rabgye, the 4th Temporal Ruler, who established the tradition of Tshechu in 1670 on the 10th day of the 8th month of the Bhutanese calendar to commemorate the birth anniversary of Guru Rinpoche. The dates and the duration of the festival vary from one district to another but they always take place on or around the 10th day of the month according to the Bhutanese calendar. Zhabdrung Ngawang Namgyal and Pema Lingpa established many of the dances performed during tsechus.

During tshechu, the monks, as well as laymen, perform the dances. The dancers take on the aspects of wrathful and compassionate deities, heroes, demons, and animals. The dances known as cham, bring blessing upon the onlookers, instruct them in the dharma (Buddhist teachings), protect them from misfortune and exorcise evil influences. The tshechu is a religious festival and by attending it, it is believed one gains merits. Deities are invoked during the dances. Through their power and benediction misfortunes may be destroyed, luck increased, and wishes realized. It is also a yearly social gathering where the people come together to rejoice. People come for tshechu dressed in their finery.

On the last day of the tshechu, a large thongdrol (religious figures embroidered on brocade) is unfurled before sunrise from the wall of the dzong. Thongdrol literally means ‘liberation on sight’, and it is believed that simply viewing one of these large relics washes one’s sins away. When the thongdrol is rolled up again to put back into the safety of dzong, the old people pray to ensure that they will live other year to see the thongdrol again the following year. 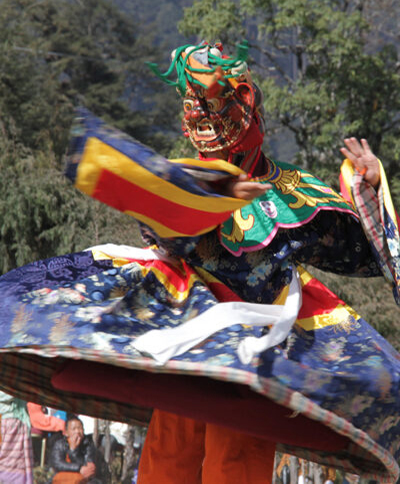 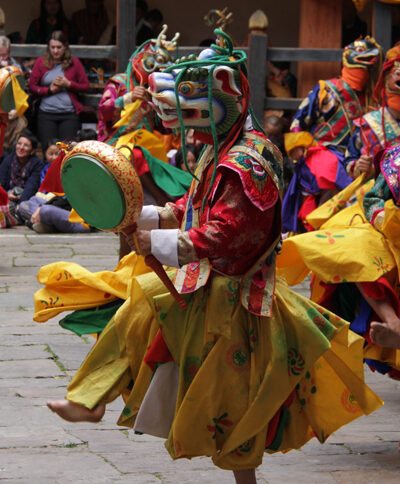