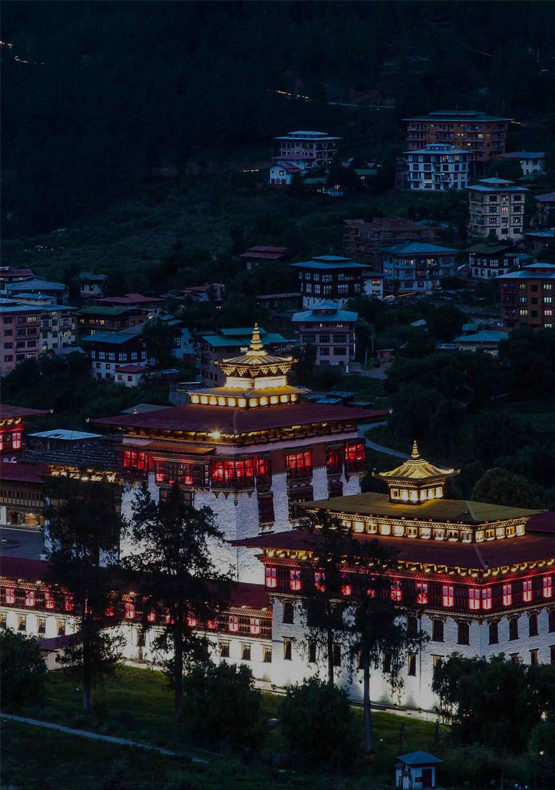 The capital of the kingdom of Bhutan is now home to almost 200,000 people. The capital is a growing commercial center with a modern pace of development that appears contrary to the otherwise beautiful, natural, quiet Himalayan kingdom of Bhutan. The 1980s brought a real-estate boom fueled by private and government initiatives, unlike many modern cities, by royal degree Thimphu has kept a strong national character in its architecture. Street names are a recent innovation. Thimphu is the only capital in the world without traffic lights.

Trashi Chhoe Dzong, “The fortress of the Auspicious Religion”, is popularly known as Thimphu Dzong. It is the seat of the government and the center of all religious affairs of the Kingdom.

The dzong is the summer residence of the Dratshang, the Central Monk Body, and Je Khenpo.

The National Memorial Chorten is the highlight of the capital city with its towering golden spires shining in the sun and its bells tinkling in the wind and was built in1974 in memory of the late King Jigme Dorji Wangchuck who passed away in 1972. The Chorten is an impressive monument and very sacred to the Bhutanese people who make an endless procession circumambulating it every day.

The Buddha statue made of bronze and gilded in gold measuring at a height of 51.5 meters is located on top of a hill at Kuenselphodrang Nature Park, overlooking Thimphu valley. It is one of the largest Buddha statue in the world.

This place has a special magical atmosphere with its prayer flags fluttering in the wind and its feeling of rising above the bustle of the city. Changangkha Lhakhang is one of the oldest temple in the Thimphu valley. It was built in the 12thcentury by Nyima, the son of Phajo Drugom Zhipo, the founder of Drukpa School in Bhutan.

The monastery was built in 1976, it was known as Thang Thong Denchen monastery. At present, it houses the Zilukha Nunnery. The nunnery is not funded by the government but the establishment is sponsored by the devoted Buddhist who sponsors the nunnery in cash and kind. According to Buddhist tradition, donations to religious firms will enhance one’s life and good karma.

The Takin Preserve houses takin, which is the national animal of Bhutan. One can also find sambar deer and goral.

Takin is listed by international conservation agencies as a vulnerable species and rare animal found only in Bhutan, Nepal, Burma, and China. Takin is chosen as a national animal because of its uniqueness, and its association with religious history and mythology.

The handmade paper factory in Bhutan dates back to the age-old handicraft tradition and its history can be traced back to the 8thcentury. The technique employed until the advent of modern knowledge was purely a household method and the usage was limited to religious and traditional purposes. Today it is considered an important element in the preservation of Bhutan’s cultural heritage.

Due to the complete indigenous character of papermaking, it is given wide-ranging recognition at home and in the international market.

The National Library was established in 1967 to preserve and promote religious and cultural degradation from rapid modern development and the library complex erected in 1984 is a towering four-storied building designed as a temple in traditional Bhutanese style.

The National Institute for Thirteen Arts was established in 1971 to preserve Bhutan’s invaluable heritage. The institute gives lessons about different arts practiced in the kingdom. It is an institute aimed at creating self-employment opportunities for the youths of the nation as well.

The museum building is a restored 3-storied traditional rammed mud and timber house.

Her Majesty the Queen Ashi Dorji Wangmo Wangchuk, who is the founder and patron of the museum, inaugurated the museum on 28 July 2001. The museum is officially known as Phelchey Toenkhyimin Dzongkha. It was established to preserve the remains of yesterday and ensure the survival of the culture of today so that the future generations can know and appreciate their past, which after all has shaped their present.

The Academy was opened in June 2013 under the patronage of Her Majesty Ashi Sangay Choden Wangchuck. It displays its collection of artifacts to further understanding of Bhutan’s rich textile tradition by introducing visitors to weaving techniques, styles of local dress, etc.

Bhutan’s famous traditional medical practitioners are trained and also unit where traditional doctors diagnose patients. The Instituted operates a laboratory and production facility where they manufacture medicine etc. The small museum within the complex has a display of a variety of medicinal plants, minerals, gems, precious metals, and some animal preserves.

The temple was built in 12thCentury and now it is a monastic school for about 460 monks currently undergoing their monastic studies. It also houses the painting from 12thCentury, which is now being restored.

Further up on the hill towards the west of Dechhen Phodrang lies Wangditse Lhakhang, which was founded in 1750 by the attendants of 8thDruk Desi Tenzin Rabgye. It is a half an hour leisure walk from Sangaygang to Wangditse.

This private chapel was built in the 1990s by Dasho Aku Tongmi. He was a musician in the royal parade during the reign of 2ndand 3rdkings. He was the one who composed the tune of the National Anthem of the Kingdom.

Known as Druk Phodrang Ding (1530), it is located north of Dechencholing The 2-imposing white structures are set in the middle of a meadow, not far from the river. This temple appeared in Zhabdrung’s vision that directed him from Tibet to Bhutan. Therefore, this was the residence of Zhabdrung when he first arrived in Bhutan from Tibet in 1616. It is now used as an astrologer’s center of the state clergy.

A trial to Tango Goenpa is a climb uphill and takes about 1 hr. Tango Monastery was founded by Lama Gyalwa Lhanangpa in the 12thcentury and the present building was built by Lama Drukpa Kuenley in the 15thcentury. At present, it houses as the university for monks.

It was built by Zhabdrung in 1620 with the aim to preserve his father’s ashes but soon became his permanent home. Chari is an ideal place for meditation and today it is an important seat of religious teachings that attract monks from around the country who come for refresher courses and spiritual retreat.

It is the oldest Dzong in Bhutan built by Zhabdrung in 1629 and it houses a monastic school for monks. One can see the finest old slate carvings around the main tower of the Dzong even today.